Why and How Cats Have Seizures

Like humans, dogs and cats can have problems with...

Why Adopting A Pet Is Beneficial

You’re ready to invite a new pet into your...

Will My Plant Kill My Cat?

Plants not only make the air we breathe, but...

It is that spooky time of the year again...

The Importance of Senior Vet Care

Pets age faster than humans; every dog or cat... 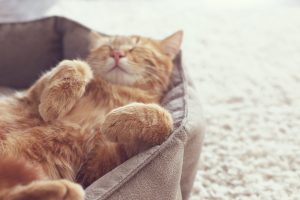 It’s likely that seizures in cats, as with those in humans, are linked to the prefrontal cortex. This part of the brain is responsible for decision making, personality, and other cognitive behaviors. During times of stress, the body produces hormones that may lead to a seizure.

Symptoms of Seizures in Cats
Typical symptoms of a cat’s seizure include a sudden collapse, loss of awareness, violent shaking of all four limbs, chewing and/or twitching of the face, and often salivation, urination and defecation. Seizures can range from mild to heavy, and the severity varies across individuals and circumstances. These symptoms typically last from one to three minutes. Some cats are prone to seizures after a particular trigger, while some just have these episodes on random occasions.

Common Toxins That Cause Seizures In Cats

Be sure to keep any of the following toxins away from cats. Seizures can be very frightening for both the cat and the owner. It is important to remain calm and to not interfere with the cat during the seizure. Be sure to also make note of how long it lasts. Just like humans, cats can also suffer permanent damage to the brain if not treated on time.

If you notice your cat suffering, be sure to seek medical attention immediately. Additionally, it is important to take them in for regular checkups, so be sure to schedule your appointment at Hot Springs Animal Hospital today!